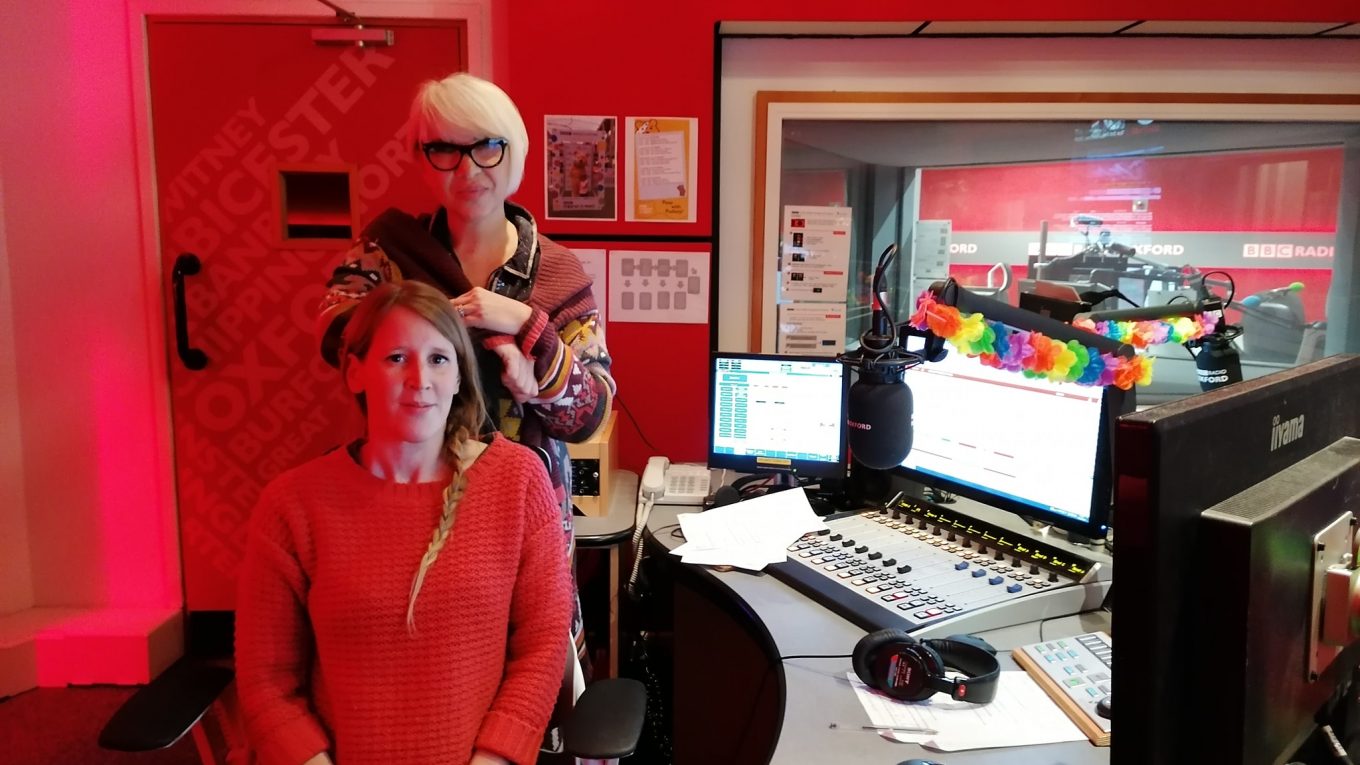 With less than 24 hours notice, I was up and off to speak to BBC Radio Oxford. I knew I had to be there for my interview at 10am and that I would be speaking about my experiences on the transplant list, but other than that I didn’t know what to expect!

My boyfriend gave me the tip to warm up my mouth (!) before arriving to help loosen up my lips! When he does gigs he does vocal warm-ups which he suggested might help with me getting tongue-tired. So on the drive to the studio in Summertown, I varied between the warm ups and rapping/singing some of my favourite tunes to get my mouth warmed up!

Arriving at the studios I was extremely nervous, and even started doing breathing/meditation exercises to calm myself down! It didn’t help that my bowels were in a Very Precarious State, thanks to starting a new drug (Itraconazole). I wondered (to myself) if anyone had ever shit themselves live on radio before – I hoped not to be the first!! Although least it would generate publicity for the cause!

I met a lovely guy called Dan who ran me through what would happen – essentially they would do the news, and after the news put a song on and I would go in to the studio in the song. The news felt like it took forever – I sat waiting nervously outside the studio with the radio station being streamed live over the speaker. It was quite a surreal feeling knowing that the voices I heard where only a few metres away, and soon I would be piped over those same speakers.

I remember hearing Paul Simon’s song “You can call me Al” come on and then Dan took me in to meet Kat, the presenter. I was in equal parts terrified, but determined not to cock it up, and fascinated by what was going on around me. I have always loved radio and the intimacy between parties so seeing behind the scenes was an amazing experience.

I sat down in this cosy, red-hued room, somewhat brothel like with its colourings and hawaiian garlands draped over the microphones. I must say that is a complement, I nearly walked into such a room during a visit to the red light district in Amsterdam. It had lovely lights and soft furnishings, which enticed me in – anyway that’s another story.

Kat and I had a chat about CF, the things she would ask me and she assured me she would help me if I got tongue-tied or short of breath. Both her and Dan were so supportive and kind, which made me feel a lot more settled and at ease. I mentioned I was worried I would start coughing and it would sound awful, but she said not to worry, that it was the reality of the situation and people needed to know. She said we could go to a song at any time which was reassuring.

I watched memorised as Kat started the show, pushing buttons and enunciating her words for her audience to hear. Before I know it, a big red light had appeared over the microphone I was sat in-front of and it was my time to talk. I had Ru-Paul in my head saying “don’t fuck it up!”.

We talked about CF and growing up with it. All quite straight-forward – I had spoken about this subject many times so I know the subject! We then spoke about how CF impacted my life now compared to previous and I spoke about things I had difficulty with.

I had joked with Dan before about what would happen if I swore, and he said it didn’t happen very often but if it did, Kat would have to apologise and we’d quickly moved on. There was no buffer – it was well and truly live. I jokingly asked what would happen if I dropped the C-bomb, to which he replied ‘well we’d all sacked!” The only time I worried it might slip out was when Kat asked me how it felt went I originally was placed on the organ transplant list. I started to say it was a huge “mind” and then got stuck as to what would be an appropriate word to follow this with. Eventually I opted for “scramble” – yes the well known phrase “a mind scramble”!!

Kat noticed I was starting to get a little bit out of breath and made a point of telling the audience this was the case to show difficulties in everyday life – and played a record to give me a bit of time to compose myself.

Afterwards we talked more about the organ donation register and how long waits can be, how I manage whilst being on the list. We spoke about the need for more donors and importance of people not only signing up to the organ donation register but to having conversations with their families. At some points I sort of forgot that I was on the radio and everyone would have heard what I had said, as it felt like having a private conversation.

Then before I knew it, our discussion was wrapped up and the interview completed and more importantly, I had managed to not soil myself on the airways. Or drop the C-bomb!

Massive thanks to BBC Radio Oxford for having me on the show and letting me share my story. Particularly Kat and Dan – they were really lovely and supportive and totally put me at ease.