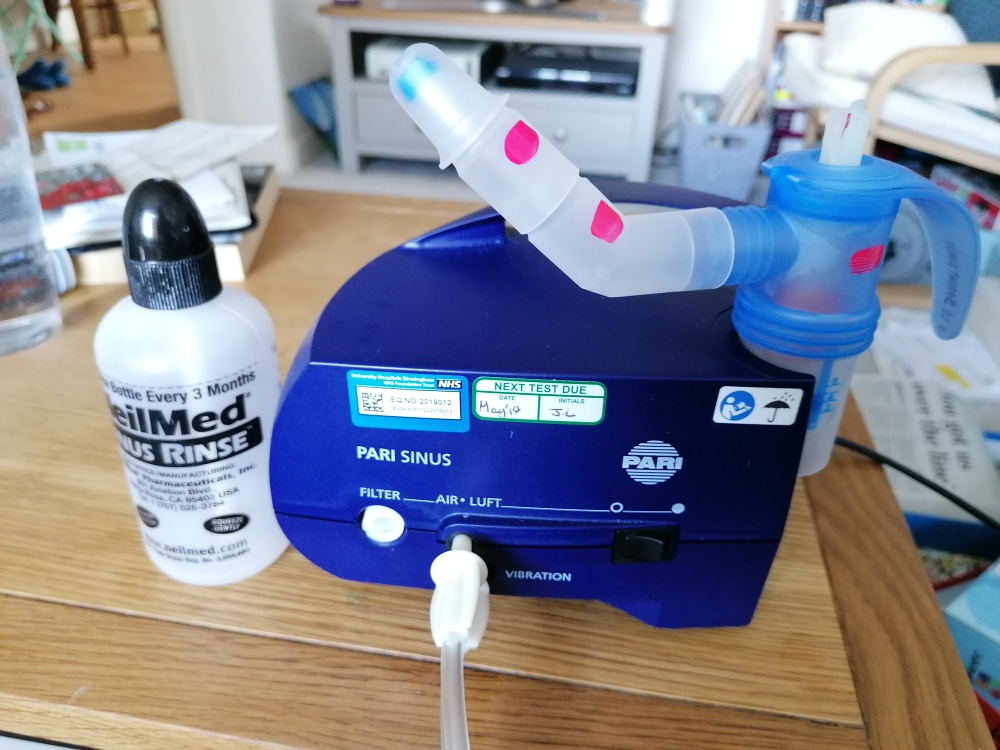 I have spent weeks in a vicious circle. Coming down with a sinus infection, this going onto my chest and then needing a 2-3 week course of IVs (intravenous antibiotics) to help the chest infection. Then come off the IVs only for me to get a sinus infection again. The current cycle length is approximately a month. 3 weeks of IVs, struggle to manage a week off then, then repeat. This is “highly frustrating” to say the least!

Having so many weeks of IVs wreck your body with side effects and leave you totally exhausted. Not to mention that my body can only tolerate two or three antibiotics now due to various side effects and sensitivities. Heaven forbid when I get a ‘proper’ chest infection caused by a virus, as there won’t be anything left in reserve.

In these sinus and chest infection times, I had a few courses of IVs at home. Since January though, I’ve been in and out of hospital (mainly in) as I’m so run down.

Referral to the ENT Team

My CF had referred me at the end of last year to have a CT scan of my sinuses and to see the ENT team. I had my CT scan mid-January and the results were it looked pretty bunged up (not entirely sure that was the medical term for it, but certainly the gist!).

During the course of a week, I had three days of consecutive visits from the ENT doctors. Each time a camera was shoved my nose. The first one told me I had polyps. The next day I was told I didn’t. The third day a junior doctor inadvertently tipped the contents of his suitcase on the floor! Which I enjoyed thoroughly. Obviously. As any sane person would.

After each of these visits, a different nasal spray or solution was presented to me having been sent up by pharmacy. Unfortunately there were no instructions on how to use them! One of them seemed to just be a small vial of sodium chloride which we have plenty of on the ward and seemed fairly useless!

The more senior doctor confirmed I didn’t have polyps, but that my sinuses were full of mucus. And that the sodium chloride vial was as unless as I thought! Chronic sinusitis CF-style! Delicious, sticky, gunky cf mucus! Delightful. Not content with ravaging lungs, CF likes to get into the upper respiratory tract and sinuses too, just to show it means business! Essentially the same problems you get in your chest you get in your nose/sinuses. He recommended a regime of nasal rinsing using the NeilMed pots with salt and bicarbonate of soda. I had used neti pots without much luck – the water didn’t even manage to get into the sinuses, it just trickled straight out again. In addition, Flixonas (fluticasone) nasal drops.

As well as this, I start using a Pari Sinus during the week with much interest from the placement physio student. I use it to nebulise Pulmozyme (Dnase) to attempt to thin the mucus, and Colomycin to help treat the infection up there. The idea is that the nasal rinses will open up the passages to help get the nebulised air up into the sinuses. The Pari Sinus is like stepping back about 15 years in nebulising terms!  It is noisy, heavy, and takes so much longer! It vibrates to help the medication get up to the places it needs to, which isn’t as fun as it sounds! It also comes with a device that looks like a teapot (with spout) and a bung to put up the other nostril. This is indeed as attractive as it sounds!

I get sent to see one of the ENT surgeons whilst in hospital. Bizarrely, this appointment is on a Sunday morning. My hunch is it is to try and get rid of some of the industrial-sized waiting lists! When I went down to ENT, the main corridor between our ward and the main entrance is closed off. In the 20+ years I have been visiting the hospital I have never seen this occurrence. There are domestics cleaning on both levels of the corridor and the door is guarded to stop people trying to enter. Apparently a person with a suspected case of Corona Virus has traveled on this corridor!

Read my previous blog post on Sinus Infections and why they started.

Next up Meeting the Surgeon…