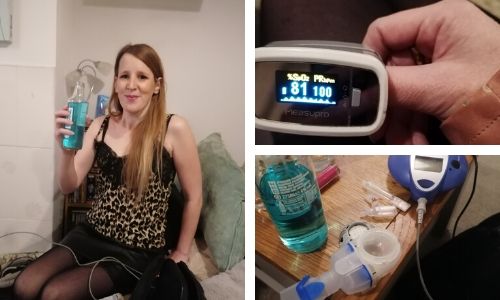 Actually that should be Absent With Leave from hospital but it doesn’t sound as fun.

When you are an inpatient for a long period of time, it goes without saying that you miss home comforts. Not to mention becoming institutionalised! There is nothing better than your own bed, even if they aren’t motorised like the ones in hospital!

The CF team is usually quite happy to let patients go home for day or weekend leave, of course if the situation allows it. On Christmas Day almost all the CF patients will go home for at least the day unless they are very unwell. Because I live quite far away from my hospital I haven’t really bothered to use leave.  This time I had been in for weeks; only managing a few days out before coming back in.

My friend was having a 40th birthday party. Incidentally, 40 sounds pretty old. I guess in the grand scheme of things it ‘s getting old. I feel like at a push we should be celebrating our 30ths, in truth probably our 25ths, but alas the calendar doesn’t lie (or does it? we’ll never know!). I asked for home leave to go to it and they (the team) seemed very happy for me to go. I was on a short break from ivs to see how my troublesome sinuses would bear up so that was one thing less to worry about.

Can You Drink Alcohol If You Have Cystic Fibrosis?

Before the weekend I was joking around with the team saying I was going to get w*nkered, but with no real intention of doing such a thing. I don’t really drink now as my chest can’t handle it, but in the years gone by I ‘liked a drink’. In the same way that the Irish /are known to like a drink. Or Uncle Derek who fell asleep in a skip ‘liked a drink’. Those from the hospital that remember me from my younger, slightly(!) wilder days now laugh when I say I don’t drink anymore. “Oh how times how changed” they say.

My patient boyfriend came up to pick me up on Saturday. By the time I got back I was ready for a nap, then got ready for my night out. Putting makeup on felt somewhat extravagant. For some reason, despite wearing makeup relatively infrequently, I have myself with a binge-video-watching habit. Not that type of video you filthy devils! Makeup tutorials and reviews. I find them so relaxing! Anyway…

One of my friends was coming up to the party and staying with us. She arrived with a bottle or two of my old favourite – the drink of teenagers and those that really should know better – WKD Blue. So we sat down and I did my nebulisers whilst enjoying a Wicked Blue. It was rude not to after she’d make the effort. It went down beautifully. The combination of sicky sweet sugar and caffeine in a beautiful blue hue – heaven! 😀 The perfect drink for a , mature adult lady. Mature adult lady sounds a bit like how someone that would advertise themselves in a phonebox – if that’s the way they still do business? Probably not nowadays!

In the last 4 years I’d been drunk once, maybe twice. The benefit of rarely touching alcohol is that when you do have a drink, it hits you quickly! Some might see that as a negative – I definitely don’t! At the pub, I asked for a vodka and soda. “Single or double?” the barman asked me…. “Ummm.” Pause “Single, single, definitely single” was my reply. When pouring out the drink he slipped and a few drops of vodka splashed out. The next thing I knew, he was pouring me in another measure to make up for it. Nice one mate! As the drinks were going down so well, I thought I may as well enjoy it! What’s the worst that would happen? Well, the worst would be I’d kill myself which was fairly unlikely, or second to that I’d end up in hospital. Which is exactly where I’d be going anyway the next day! My 99% treatment compliance and attempts to lead a healthy lifestyle weren’t doing me any favours, so what did I have to lose?

I enjoyed my night it had to be said. At one point my friend, who I’ve not seen properly in years, said “Roper, you want a shot of tequila?” No apple sours or any of that lame crap. Tequila or nothing. Of course I said no… wait, oh what I actually said was “if it’s after 9, then ok!”. It was 8.55pm so it seemed churlish to refuse. I had a great time. I managed to dance. A little. I got myself quite out of breath. I had to walk up some stairs which was challenging as I’d not attempted them in ages. I stopped drinking quite early and ended up sitting watching people dance. It’s not as miserable as it sounds! My friends know the state of play and include me by dancing up to me. Erotically, if I’m lucky.

But You Look So Well!

Of course the classic line was uttered to me when I told people I had been in hospital for almost the whole year so far… “But You Look So Well!” Yes!! I know. But my sinuses and chest are an infected mess! 😀

By the end of the night I was feeling worse for wear. Not from the booze (well not directly)! I could barely walk. I needed to get to the kebab shop which is a very short stumble down the road. It took me about 10mins to get there with the assistance of my friend and boyfriend. I used to frequent the kebab shop (Bodrums for those interested!) for years in my ‘going out’ years. Even after all this time, I went in there and there was a bloke I still knew working there – he kindly gave us some freebies! I politely turned down the baklava, it’s not for me! The food was heavenly!! When I got home my sats were 81% – kind of explains why I was struggling to walk!

Returning to Hosptial After Leave

The next day, less than 24 hours since I’d left, I was back again. We dropped my friend off at the rail station and carried on up to hospital. I felt like I’d been gone ages! A proper break.

When I got back to my room, it felt like a hotel room where the maids had been in!! My bed was freshly made and inviting. There was even a little note from the lovely weekend domestic who had put 3 jugs of water in my fridge in case I was hungover. We have a long-running joke that I’m only allowed one jug after a domestic from another ward told me that was the rule and there were only as many jugs as rooms!

The true beauty of this was I could climb into bed with a mild hangover (mainly tiredness) and be waited on hand and foot! If you have a hangover I truly recommend a visit to a CF ward! You get salty. fatty food, and have every excuse to laze around (especially if you get back later than the physios work). The true genius (in my opinion) was that I’d saved a bag of IV fluids I’d been prescribed earlier in the weekend to have that night.

The following day I was totally exhausted (unsurprisingly) but in good spirits. I told various people about my night and they were delighted for me. Most people said ‘to be honest you probably needed it’. Physios were happy I’d attempted a dance and got out of breath. “It’s good for your lungs” they said.

The boring bit: of course I don’t recommend this behaviour…. Drink sensibly guys! Cue sniggers from those who have known me the longest!