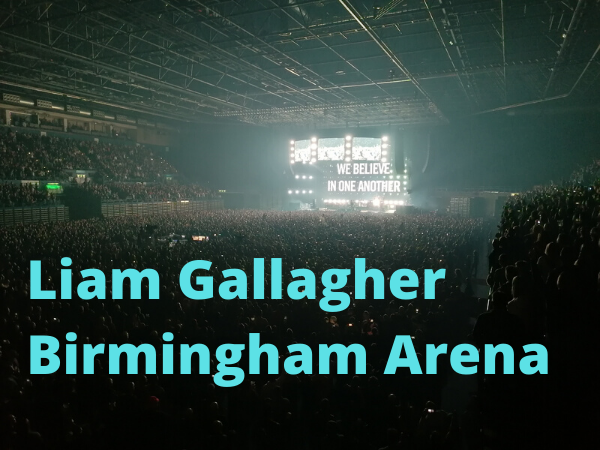 After visiting the hospital the day before, I wasn’t filled with joy at the prospect of another trip to Birmingham. But for Liam Gallagher I could make an exception.

My other half had seen Liam Gallagher at one of his big outdoor festival style shows in Finsbury Park last summer and come back with glowing reports of an Oasis heavy set. So we  decided to get tickets to see him on his UK tour – as I am usually in hospital at this time of the year, we bought them for Birmingham so if I was well enough I’d still be able to see him for an evening out. As it turned out, I am out of hospital and well enough to go – a nice surprise! I have lost count of the number of gig I’ve bought tickets for and been unable to go at this time of year so this was a good start.

Stuck in heavy traffic, on a dark rainy Tuesday rush hour, I wondered what had possessed us to make a decision to leave the house for a three hour round journey! But it would all be worth it when he did Live Forever I told myself!

We got there early enough to stuff down an over-priced but surprisingly tasty burger and chips from an outlet in the arena and catch the last few minutes of the first support Twisted Wheel.

Australian band DMAs were the main support. On record they are heavily influenced by Madchester and BritPop scene with Stone Roses, Oasis and even the Levellers (am I the only one that hears that?). They have some song beautiful melodies and sound quite soulful at times, but with the rockier guitar sound. They played a good set and got the crowd nicely warmed up for the main man himself, but they were so far away I couldn’t get into them. I’d like to watch them in a smaller venue as their songs are great.

The floor was filling up and while we played a game of spot the orange parka, the speakers pumped out songs to cater for the audience’s tastes. Each song evoked a mass indie karoke sing-a-long with acts including Stone Roses and The Jam. It was quite powerful and added to the building atmosphere. I was equal parts envious and relieved that I was not in the standing area. I can’t manage to stand at gigs now as I get too breathless and for the same reason I can’t really drink. Standing was the only way to see gigs in my younger days – but hey, things change right?! Better to be seated than not be there at all!

Right on queue, the lights dimmed and Gallagher sauntered on the stage to kick off proceedings with Rock n Roll star. The atmosphere charged up three notches instantly,  with pints thrown in the air and the crowd going wild. He followed this with his solo stuff: Halo, Shockwave, Wall of Glass and Paper Crown. Just in time for a quick trip to the bar – but some might have been caught out by Morning Glory following this. This was the song of the night – it just sounded so good! Stand by Me also went down well. The band and Gallagher sounded great together – tight, precise but still with a swagger. “Come on you lunatics!” he commands at one point. The crowd happily obliges.

Bonehead joined Liam Gallagher for the Oasis songs and there was some banter at his expense. In fact LG was quite chatty in between songs, especially responding to members of the audience. “What’s that mate?” he asked, quickly followed by “I’m cool? Yeah I know that, you don’t need to fucking tell me.”

We got “two Gallaghers for the price of one” sadly not the other Gallagher we would have liked, but his son Gene playing bongos on a couple of songs near the end.  One day I imagine that Oasis will reform – when the solo careers have dried up a bit and LG has a few more love-children to support – in a decade or so, not tonight!

The main set finishes on Wonderwall which saw groups on friends arms around each other singing the anthem of the 90s.

Of course, he quickly came back on for an encore (Liam is after all, the man who gives the crowd what they want!). This kicked off with Acquiesce which saw the audience invited to undertake the part of Noel, with the words on the screen, on the off-chance anyone didn’t know them!

Roll With It and Supersonic followed and the final song (or so we thought) was Champagne Supernova. In agreeing the ‘terms and conditions’ for me driving home, I suggested we leave at the start of the last song. I had read on TripAdvisor tales of people stuck in queues of an hour or so when trying to leave the car park and for the sake of one song I would rather be in bed an hour earlier! My other half grudgingly agreed and as we were pulling out of the car park, we saw all these people sprinting back to their cars, obviously with the same idea. I later read on Twitter that as the arena was emptying, LG came back on and played Cigarettes and Alcohol! I haven’t told him yet!!    There was a higher proportion of his solo stuff compared to other shows, but to be fair he has two albums out now and did still give us 11 Oasis songs! Sadly no Live Forever but an thoroughly enjoyable night!

The venue requires you to have a Access Card (run by Nimbus). You can buy one which is valid for three years for £15, or just register for a one-off for free to use in Birmingham Arena. I bought the three year one and have found it useful to have and have found some places will give reduced entry fee or allow a personal assistant entry when I have shown the card.

The place is huge and despite the car being right next door to the venue, there is a lot of ground to cover between the two. We took a wheelchair and I would have struggled without one. As we hadn’t booked parking in advance we headed to the South Car Park. Level 11 is on the same level as the arena, so limits time waiting for lifts etc. I think the majority of the parking on this level is disabled. You can pay for parking online when you arrive which helps save those precise minutes when leaving.

Seating wise, the area reserved for disabled visitors is at the bottom of the main stands – our tickets were for block 105 but it looked like it stretched all the way round. The view was pretty good, although obviously you are some way away from the stage, as these seats at this end of the venue all are. The best part for me was there was no stumbling across other people in seats. The area was only a few metres away from the block door which made accessing the toilets. bar etc handy. It is worth bringing a Radar key if you have one as most of the disabled toilets need to be unlocked using one.

Also, really helpfully on the Birmingham Arena event information page they give precise stage times including breaks to help you plan your evening. Try getting that out of the O2 Oxford!