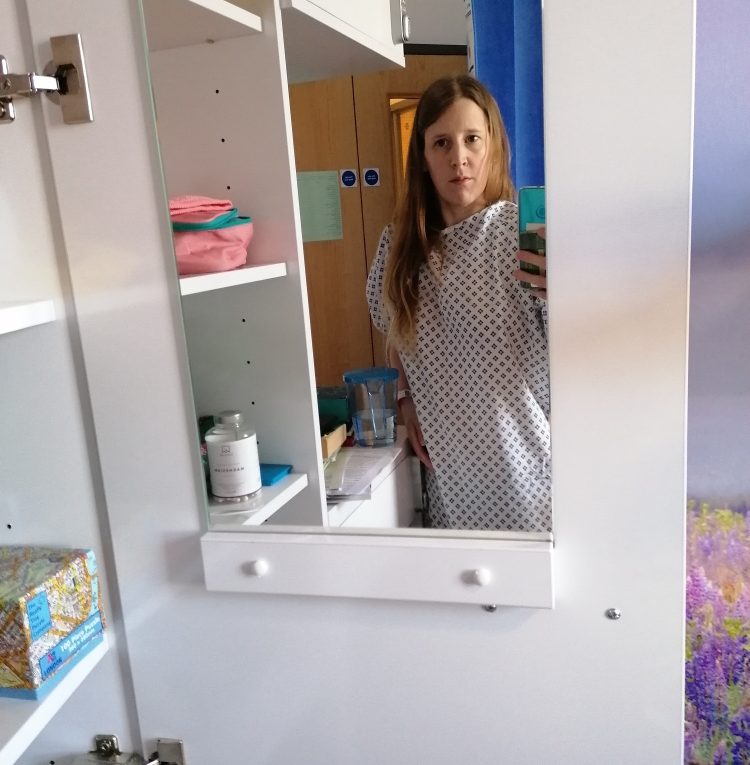 My Experience of FESS – Part One

After seeing the sinus surgeon, I had a marvelous ten days out of hospital. It truly felt like a holiday. I caught up with friends, walked the dog and enjoyed some fresh air. I ate a lot of delicious homecooked food! Steak, roast dinners, sausage and mash. I did miss out on the Supergrass gig at Ally Pally, but this may have been a blessing in disguise ultimately as some of the people who went ended up getting COVID-19. During this time, I was contacted by someone doing a media degree at Oxford Brookes who wanted to do a piece on the changes in the law for organ donation, so I was interviewed/filmed by them.

Someone Else’s Story of Sinus Surgery

I was chatting to a dog-walking friend who told me about her experiences with FESS. She said after the operation she was high as a kite and loving life. She called up her husband and asked him to bring pizza on his way up to visit her. She said by the time he had got there, she was sat with packing in her nose enjoying life somewhat less! Apparently they had given her medical-grade cocaine afterwards. That was a decade ago, so I hope they haven’t changed their practices; I like the sound of medical-grade cocaine!

I was scheduled to go into hospital a week before my operation in order to start yet more IVs. In this time I met several members of the ENT team, the surgeon* and the anesthetist.  Becasuse of the complications after the last operation, where I spent 10 weeks in hospital and nearly died, there needed to be some careful planning. The anesthetist told me he was planning to use much more short term acting anesthetic that the body would process more quickly and should make me less sick. “Fentanyl” he said. ‘Hang on‘, I thought, ‘I’m sure I’ve watched a Louis Theroux documentary about that!’  Oh well, it’ll be a good story to tell if nothing else!

The day before the operation, the anesthetic visits again and says that I’m first to be operated on and they’ve scheduled in five hours

for the operation. FIVE HOURS?Wait.., what?? I haven’t mentally prepared for that! And my body definitely hasn’t prepared for that. He says he won’t let the operation go on longer than three hours as “it won’t be in your best interests and he’ll wake me up himself if he has to!”. This guy is due to retire soon and is said to be one of the most experienced anesthetists in the Trust. I imagine he has some clout. I’m glad he’s got my back. Well, he will have all of me during the operation(!).

In my experience of operations, I find that everything is done in a bit of a last-minute panic up on the ward before you go down to theatre. Forms to sign, wrist bands and gowns to put on, jewelry to remove etc. Knowing this I set my alarm early to get showered and get my nebulisers and treatments done at a relaxed pace. This definitely helped reduce nerves. It is weird being nervous for an operation as actually you have no control over it. Maybe that’s what makes me apprehensive? Once I read that nerves and excitement have the same impact on your body – just that excitement is a positive feeling and nerves are a negative one. Let’s just say I felt fine, but it’s only when got into the operating theatre I get properly excited! 😀

Straight after the operation

I wake up and my first thought is ‘I’m alive; I made it through!’ And then ‘Oh, I’m being sick and my head is being held up…. But at least I’m alive!’

I gradually come round more and over time stop being sick. I am really confused as to why I have someone else’s red coat on the end of my bed as well as my dog’s ball. I manage to alert them to the presence of the red coat “that’s not my coat!” I say urgently, obviously concerned about cross-infection. Someone laughs and explains it’s a disposable cloth they use in the theatre. And the dog’s ball is actually the filter on the end of a mask that has been removed. It’s obvious now! I can’t believe how much I am sweating – I am seriously overheating! And I notice I can breathe through my nose. What an improvement!

Someone tells me I am wrapped in some kind of cellophane wrapping to keep me warm. Well it is certainly doing a good job. I imagine this is the kind of treatment boxers use to get their weight down before a weigh-in.

Whilst in recovery I see another woman brought through after an operation. She wakes up serenely and removes her mask, uttering a few gentle words to a healthcare professional. I’m like a rowdy lager lout in comparison!

They take me back to the ward. I must be a bit high as I pass a phlebotomist and jeer to her “you don’t need a facelift”. I must add that I had been chatting to her a few days previous about facial surgery; she wasn’t a complete stranger. At this time Covid-19 was just becoming more newsworthy. I noticed people weren’t getting out of the way of the bed, so was really tempted to shout “Move out of the way, I’ve got Corona Virus.” Luckily even in my state I know this was not sensible behaviour!!

My partner arrives just as I get back to the ward. I don’t recall much of our conversation other than I really wanted to hear Ladbroke Grove by AJ Tracey. This then turned into a set of Old Skool Garage Classics. I was having a great time! A couple of the nurses said I was high as a kite. I was affronted – this could not be true, I was just in a good mood. By the time my other half came back from getting a coffee at the Starbucks, I was less joyous. I had gone from my garage classics to listening to Morrisey. A somewhat similar story to my dog-walking pal’s tale from a decade ago! Maybe I had been a bit high after all…

Read about the meeting the surgeon and my ongoing chronic sinusitis issues.

*Whenever I type “the surgeon” I think of a book I read about 15 years ago with the same title. It was about a surgeon who brutally operated on/tortured victims. Pretty sure there were a series of books. I hope the surgeon wasn’t the muse for this novel.

2 thoughts on “Sinus Surgery – The Day of the Operation”