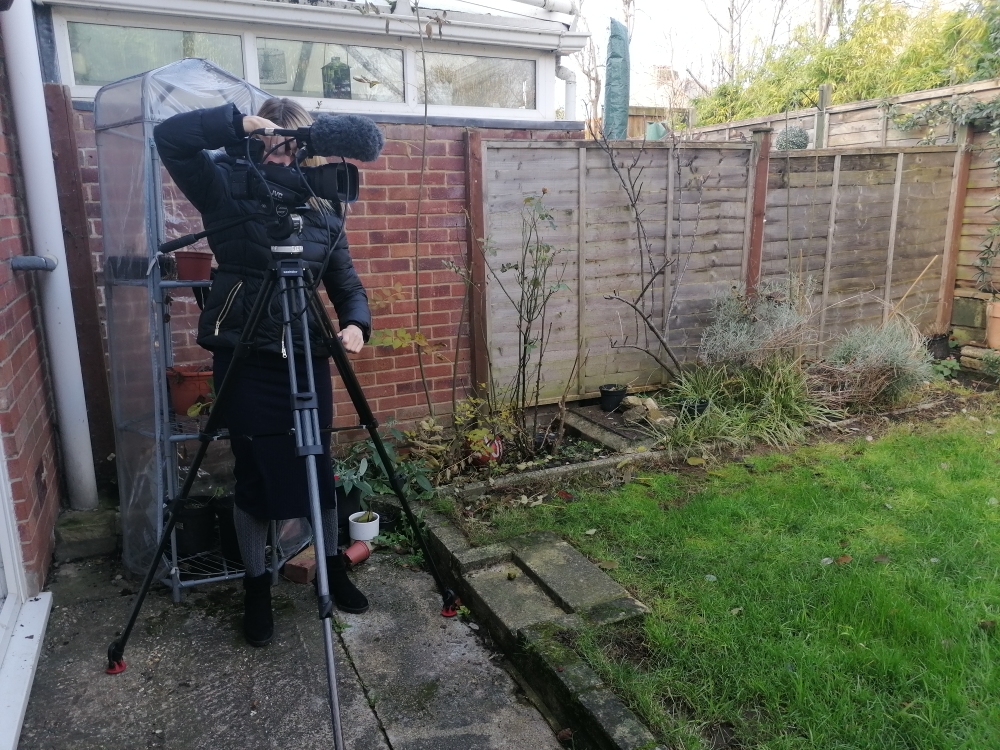 Part two of my ‘media day’ followed with BBC South Today filming me for an interview. After my radio interview earlier with BBC Oxford, I met Natalie Verney who was going to be coming to my house. We agreed she’d give me half an hour and then follow me. This gave me time to go home and take a moment to gather my thoughts and cram down a banana.

When Natalie arrived we had a quick discussion as to the best course of action. She said they usually like to film the interviewee carrying out a daily task like making a cup of tea, but of course one look at my dog P and she was keen to use her in the footage! As such, we had to work around her schedule as the dog walker was coming soon, so we rushed to film her outside before she went off for her next appointment! It puts you in your place, when everything revolves around your dog’s social life!

We filmed outside. Me throwing the ball, P scampering after it and (as expected) not bringing it back! Each shot had to be filmed twice from each camera location. And each time the camera was moved, it had to be readjusted and focused. After a few attempts, we decided that bribes in the form of cheese was what was needed to get the star of the show to perform her best.

We recorded some more scenes: me walking in and putting on my nasal NIV specs, sorting out tablets and even some coughing thrown in for good measure. I tried to pick out the most colourful tablets to make it more visually appealing; Blue and yellow Carbocisteine and baby pink Orkambi were selected! Again, each scene took a surprising amount of time, especially when there was a need for continuity. Putting out some tablets must have taken about 15minutes.

By this time, the early start and trip to the radio studio had taken its toll. I was really feeling quite tired, but we hadn’t even started the interview yet!

My home is NOT set up for TV!

A former colleague once had his house used for a television advert. It paid quite well apparently and they just had to make sure it was tidy in the living room. Well my house is properly the opposite to this – not set up for TV!

It was difficult to find a suitable spot for the interview as the room is quite small, and the obvious place for me to sit down is the settee which has a big window behind it. We opted for the chair by the bookshelf. I was a bit worried as this shelf is somewhat cluttered with a strange array of books from my various obsessions over the years! The unfortunate thing about this position is the sun was shining right into my eyes. I’m sure it was great for lighting but I was squinting so much!! I know this was not going to be my finest hour before we even started the interview!

The questions were fairly self-explanatory – relating to my condition, the impact it had on my daily life and the impact of having a transplant would make to my life. It is always a difficult question to answer as hopefully it would make a hugely positive impact on my life, but I’m not naive. I know there is a constant risk of infection and rejection. Essentially swapping one set of problems for another. But you don’t want to go into details like that in an interview which has the aim of encouraging people to sign up to the organ donation register!

The advantage of the radio interview earlier, is that because it’s live you just have to get on with things and try to correct what you have said. When filmed, you have the often to record again and this seems to trigger something in your brain which relaxes and lulls you into a false sense of security… and you can’t articulate yourself properly!

How did I do….? Well judge for yourself – the video is below. Or view the video and short description on the BBC website.

I think I look like Thom Yorke of Radiohead, with my squinting eyes. There is also a part which me and my boyfriend have been laughing at where I realise I’ve used the word “register” twice in the same sentence. I stop for a second, frown and decide to carry on! We also have been laughing about the fact I list ‘having to carry my phone with me at all times’ as a consequence of being on the transplant list – everyone does this anyway! 😀 P is very happy how she turned out on screen by the way!