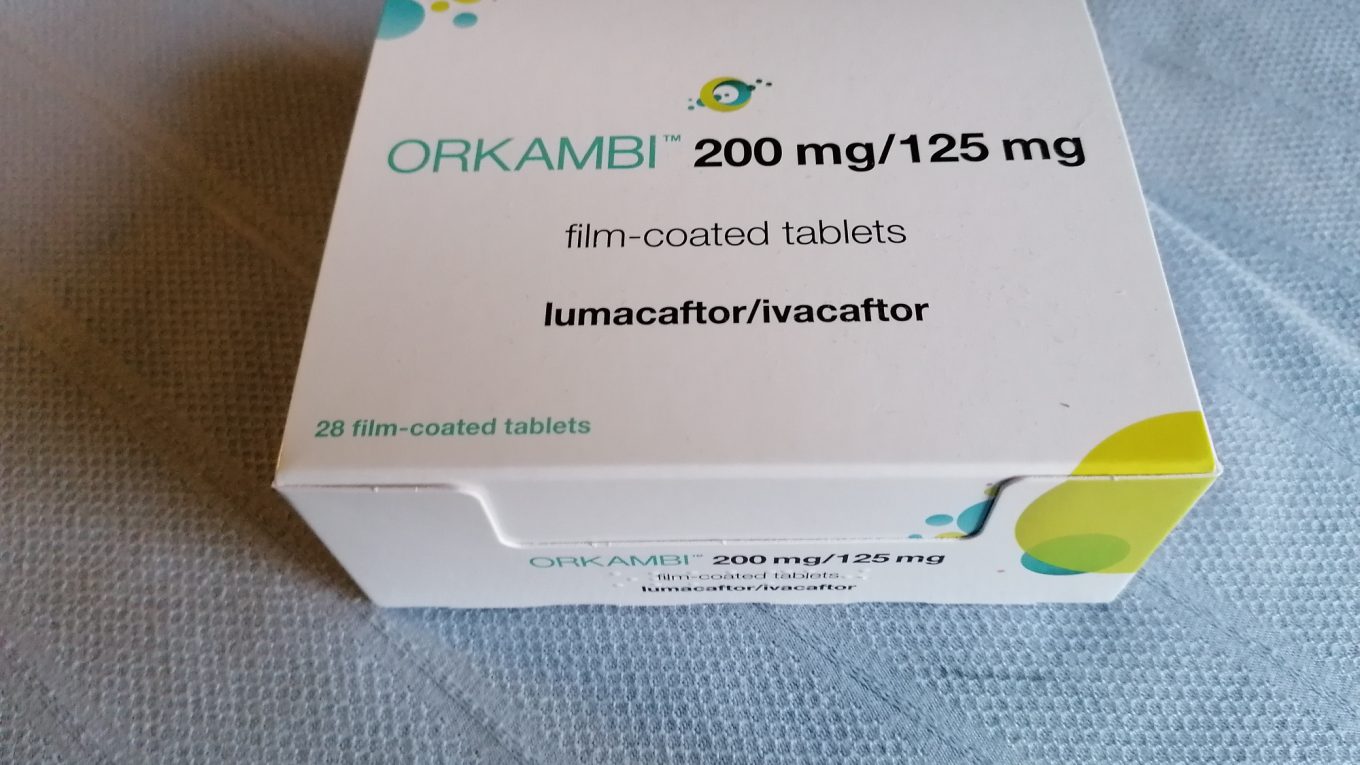 For four years the CF community, particularly the CF Trust, have been campaigning for Orkambi to be prescribed on the NHS in the UK. This drug is a precision medicine which helps CF patients with two copies of the F508del mutation (approximately half the CF patients in the UK)

Eventually a deal was struck between (not so) NICE and the manufacturers Vertex and CF patients now have access to these drugs.

Orkambi in the UK

I started taking Orkambi in early 2016, when I was offered it (and then at a much later date Symkevi) on a compassionate basis, paid for by the drug company Vertex. In order to get Orkambi prescribed on compassionate basis, you had to fulfil certain criteria – namely being under a certain lung function and/or deteriorating rapidly.

I started Orkambi (Ivacaftor/Lumacaftor) after I had been very, very unwell. Read – lucky to still be here. I had already been in hospital for an eight week stretch. I had lost weight, huge amounts of muscle and my (already relatively low) lung function was culled.  This was April 2016. My consultant spoke to me about this new drug that they would like to try me on called Orkambi.

I had not heard of it, or if I had, I knew very little. I was one of the first at my CF centre to go on it, and experiences were variable apparently.

Obviously I was pleased to know my gene mutations were suitable for this new drug and hoped it would offer me some improvement, or at least stability.

Due to my low lung function, I was started on a quarter dose (one tablet once a day).  I did think this was wildly cautious, but boy, am I glad it was no higher!

At the time Orkambi was said to cost £172,000 a year. Eye-watering, not to mention the ethics of a drug company charging such a premium! I worked out that a week’s box was well past £3k and each tablet £120 a pop! I have to say the packaging is pretty nice, but at this price I would hope so too!

I recall having to do a pregnancy test, despite the fact I had been in hospital for the previous two months unable to leave my room – but “you never know” they said! I also had to sign some kind of contract to say I wasn’t planning to become pregnant, and that I understood that Vertex could take away finding for the drug at any point.

I clearly remember the first dose I had. It was mid morning and one of the ward sisters, who I’ve known for about twenty years, bought it in, held aloft in one of those little white paper medicine cups. I had already had my standard morning tablets, so it was this one small, but very pretty baby-pink tablet. We laughed about saying it was such an underwhelming experience and should be bought in on a silver tray with a band playing for the cost of it! Held by a butler-in-the-buff.

As the day drew on not much happened – I was slightly more out of breath than usual, and thought I’d got off pretty lightly (I had been warned it created a purge like effect as all the dormant sputum moved).  The next day the side effects hit me! Absolute horrendous shortage of breath and exhaustion. It felt like I was constantly in need of my salbutamol (Venolin) and ipratropium (atrovent) nebulisers, even if I’d just had them. I spent pretty much the first fortnight existing only on my Non-Invasive Ventilator (NIV) – in effect letting my machine breath for me.

I recall other side effects, relatively minor looking back in comparison to the breathing, Sweats. Headaches. Stomach cramps and foul stools (worse than usual). Wind. Mild fever. But just so much coughing. I didn’t think I could stand to be on it longer – every day my consultant said ‘let’s give it one day longer, and then we might have broken the back of it’ or other words of encouragement. I just remember the coughing, the shortness of breath – relentless! Every day it stayed the same. I felt so poorly and wondered what on earth could be in this one tiny pill to make me feel this way.

I think the worse was at night. I couldn’t sleep as I could feel all the mucus moving in my lungs. Not just a gurgly bit here and there that would shift with a big cough, but in every part of my lungs. I felt like I was drowning, probably because I was – drowning in my own mucus. If this was what a quarter dose was doing I don’t think I would have survived starting on a  full one! Sleeping upright helped marginally but if I slept, my dreams would always involve something related to my breathing – dreaming I was drowning was fairly standard, and I’d wake up and realise I basically was. More creative dreams involved water slides – nothing as fun as going on water slides, but dreaming my lungs were water slides with the mucus the water to flow through them.

I should mention that I was (still) on ivs whilst I started Orkambi.

Orkambi – the mental health side

One thing that was difficult was I felt so alone. Going through such a torturous experience is hard enough when you know what to expect, but as I was one of the first at my centre to go on the drug, my doctors could offer little advice.  All I wanted to know was if it would get better and when, and to know others had survived the initial main Orkambi side effect – “the purge”. This is when all the nasty old sputum starts moving from the depths of the lungs – I suppose you could liken it to a huge house declutter where the place looks much worse before it gets better!!

Eventually found a small group on Facebook (which now is much larger and has a lot of American CF-ers going onto the triple therapy) . I was so relieved to find this source and read the experiences of people who were taking it. These were people primarily in the States as it had been around a little longer then. I have never felt so glad to read that I was not alone and others had also many of the difficulties I had.  One of the difficulties of CF is that patients can’t really have contact with each other due to cross infection, which means sharing experiences is difficult.

After some time I started to improve, regaining some energy and the shortness of breath easing. I seem to recall that once I started to feel a bit better, the side effects started to reduce relatively quickly. The very worst of the side effects were about two weeks long. There is absolutely no way I would have been able to survive them without being in hospital. I was in a fragile state anyway.

The Orkambi side effects do eventually go!

Starting Orkambi, even at this level was really tough for me – but I am still on it (full dose!), after a minor flirtation with Symkevi. Those with a higher lung function and in better health than me should find it a lot more manageable. Reading about people’s experiences in the Facebook group I mentioned and online suggest that starting a full dose is perfectly manageable if you have a higher lung function and fitness.

I’m so happy that NICE and Vertex have finally come to an agreement, as I really think these drugs (Orkambi and Symkevi) could be life changing for the CF community if patients take them with less lung damage and higher lung capacity. Now that our American friends have started getting access to the Triple therapy, the pressure will start mounting to get a deal done to prescribe these on the NHS, though I think we are some way away from that now.

If you are about to start Orkambi, please bear in mind these are just my experiences and everyone has different experiences – I don’t want to scare you off!

3 thoughts on “Starting Orkambi in the UK”