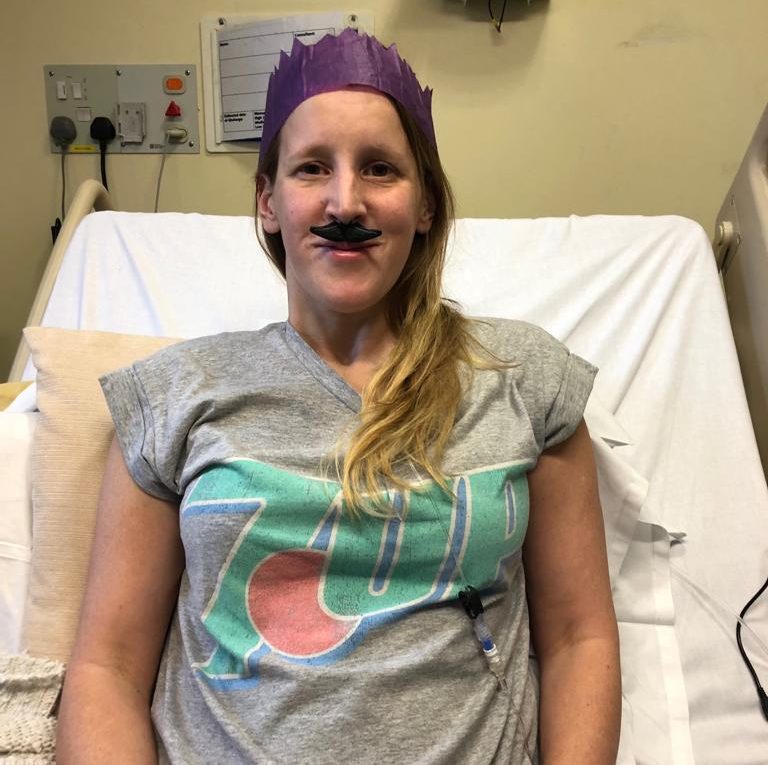 My partner came up to visit and we hung out. He pushed me down to the hospital cafe at the entrance, which wasn’t open! So we got some snacks from M&S and ate them across a table in an empty canteen. A romantic festive setting if there ever was one – with a bag of Sprouts on the table as a decoration. Yes, those infamous sprouts!

There was a surprising number of people about, none of which seem to have any festive cheer. I still had my hat on from my Christmas cracker and got not even a smile!  I do look like a complete and utter cretin, so I’m not surprised! On our journey we found two notices directing people to the Children’s pantomime, but sadly we don’t find anything as remotely exciting.

By the time he’d spent a couple of hours with me I was feeling exhausted; he went on to his family’s Christmas dinner and I slept the majority of the day.

Are hospitals busy on Christmas Day?

Christmas Day in hospital itself is very quiet. Most people have been discharged and if at all possible patients are allowed to go on day or overnight leave to spend the day with their families.

In our ward of 20, a few were on day release (does that make it sound too much like a prison rather than a hospital!?). I think the actual number of patients there on Christmas Day in hospital was about 4-5.

Is it lonely in hospital at Christmas?

To be honest, I was pretty out of it during the days around Christmas. I didn’t really feel any emotions other than trying to concentrate on resting and feeling better. In those kind of situations you kind of take things minute by minute, hour by hour. It could have been any day of the year to be honest!

A family whose loved one had been treated for CF on the ward came in dressed as Father Chrismas and Elves to give presents to patients and the nurses. It was really sweet that they made the effort to spread some Christmas cheer and honour their daughter/sister in such a way.

The only time I felt sad was when I was half asleep and woke up to the sound of people crying as their relative had passed away. It was apparently expected and they had come up from A&E so at least they got some privacy in a side room. Still Christmasses won’t be the same for them again I imagine.

Perhaps the least enjoyable part of the day was that the heating was broken (I personally think somewhere, someone decided to turn it off!) for Christmas Day and Boxing Day.  It was absolutely freezing in the ward and especially in the rooms. I had my onesie on, blanket over me and a wool hat on! Everyone knows how warm hospitals usually are! At one point, one of the HCAs came in lugging a big electric heater saying “it’s your turn for the heater now Helen!”

Do treatments change on Christmas Day in hospital?

You get all your usual drugs on Christmas Day in hospital – all your everyday tablets, nebulisers and IVs are dispensed by nurses. If you are ill enough to be in hospital on Christmas Day, it’s likely you will need chest physio. The respiratory physios pull names out of a hat to see who gets what shift, so you’ll always see someone. It actually turned out to be someone I knew quite well, who is particularly partial to a bank shift, so it was nice to see them. It’s basically like a very quiet weekend day. There are fewer doctors around, so my advice would be the same as a weekend – if you are planning on having an emergency in hospital, avoid this period! 😉

Read Part One of Christmas in Hospital – The Build Up

2 thoughts on “What’s it like to spend Christmas in Hospital? – Part 2”